The disclaimer:  this isn’t a health update. More ramblings from my faith journey.

The featured image is of a large, distressed metal plaque with the lyrics of John Lennon’s Imagine.  It is on display in the Monarch patio restaurant at the Hotel Zaza in Houston where we frequently stayed for my visits to MD Anderson. That gorgeous patio was our favorite place to relax when away from the medical center, and I must have gazed at this plaque and read these lyrics a hundred times.

I remember when I was younger that this was one of my favorite songs. I know now that it is because I really didn’t understand the lyrics. But the song feels great. Hopeful and compelling. But as I grew older and began to truly listen to the song, as a Christian I realized that Lennon is most likely describing a world where people are united as one without God because there is no God. And if the world ceases battling for a non-existent truth, then there will be peace. Sorry, but I don’t believe this. It sounds like an ever-clashing battle of worldviews. Chaos.

So I regretfully began to avoid the song because of the mixed feelings it generated.

I bring this up because a couple of weeks ago, our pastor, if I recall correctly, encouraged our congregation to not give up imagining their lives could be transformed by the gospel because imagining change is part of the process of change. It struck me because I have been pondering this idea for weeks now. As he said it, I was fidgeting with my wedding ring, a frequent tic of mine. For some reason, I’ve been thinking about the symbol of the ring a bit recently too. To cap it off, as this week is the start of Advent, a wreath, a ring of evergreen, was hung on the podium for yesterday’s service. I wasn’t aware of this, but, for Advent, the wreath symbolizes life without end through Christ. So, these seemingly unrelated concepts have been twisting in my head for too long now. Transformation. Imagination. Rings.

Bear with me now. I recall during leadership training an image that Pastor Aldin used to illustrate a theological concept called “Union with Christ”. I show a modified version below where I provide the general concept along with the theological term, granting that my succinct definitions fall short of capturing full meaning. What I like about this image and what I want to point out is that for followers of Christ, there are incredible gifts, where not only are we “right with God”, we are His children and are equipped to persevere through the struggles of this life, which in some mysterious way are preparing us for the hereafter. These rings are guaranteed inseparable, untarnishable, and unbreakable. The gifts they describe enable us to imagine our lives beyond our current circumstances. They enable us to love and forgive one another. And ourselves. 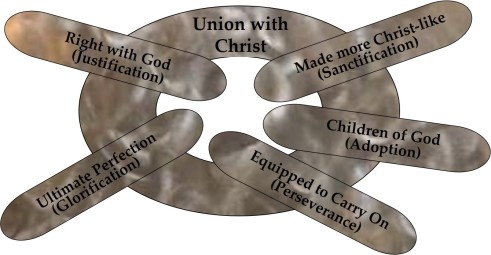 Sometimes, as I fiddle with my ring that I can so easily remove, I’m thankful for these that are permanent. But it also makes me think of other rings and the power they hold when they are yet symbols.

We all know of friends or family whose marriages waver for long periods of time and yet survive. In speaking with them, you hear of times of frustration and moments of hope, but you sense the strength of the union, the vows, a vision of what could be if they hold on one more day. Perhaps giving up the rings would be to release their grip on the hope that transformation is possible. Not just for their marriage but for their lives. I imagine partners clinging to the promises of Jesus and persevering, hoping to experience the contentment that was the promise of their wedding day, to see each other again as when they willingly gave their lives to the other and committing to do so even now, when they understand how difficult that really is.

I have also heard of marriages that have been restored by the exchanging of new rings. Sin had shattered the covenantal bond, irreparably dissolving the union, but the power of forgiveness prevails. I imagine spouses first having to grasp the burden of their own sin, which Christ bore on the cross, before they can be willing to bear the sins of another, forgive and make themselves vulnerable again in a renewed marriage. Humility, thankfulness, and spiritual security slowly overcome bitterness, anger, shame, and guilt. The desire for retribution is replaced by the need for redemption, for both the individual and the marriage. Trusting in their permanent identity as children of God, together they can begin again with the vows that establish one flesh and grow to help each other experience the healing power of knowing Christ more deeply, fostering an intimacy of their souls. And so it is possible for the same two people to imagine new vows with new rings creating a new and unbreakable union.

But if I can conceive of the possibility of restoration of marriage because of the need to believe in restoration for myself, there is one story that escapes the limit of my imagination. I have dear friends who years ago delivered a stillborn nearly full-term. What’s more, from early on, they knew the child would have Down’s Syndrome and so had prepared, as a family, for the changes their new son would bring. To witness the faith of my brother- and sister-in-Christ during the pregnancy was testimony enough in the power of the gospel, but it was their action in burying their fourth child that awestruck me then and now. Husband and wife removed their wedding rings and placed them in the casket to bury with their son. It wasn’t an act of closure– the rings were laid for safekeeping until their glorified bodies can embrace in Heaven, and he can return the proof of their bold promise to be reunited, possible only with the firmest of security in their union with Christ. It is difficult for me to imagine faith like this. We know it is a gift from God, and to them He gave lavishly.

I write about these testimonies because the perseverance of these believers provides great encouragement for me when exhausted from the journey. In dark times, when my imagination provides no vision of a miraculous future, when God seems merely an abstract to explain the unknowable, the story of Jesus rising from the dead a fairy-tale, and the Bible a collection of stories written by uninspired men, it can often be the lives of others that helps me to see clearly how God is at work. And I can imagine how lives can improve if we increasingly embrace the gospel. Including my own. The stories of these wedding rings bring to life the diagram of rings representing Union with Christ, and I remember the gifts. Hardship can and will break us physically and mentally, but the gifts bestowed upon us by Christ uphold us spiritually. And we persevere together.

And so I believe that transformation takes imagination. Life takes imagination. Ironically, listening to the song of peace called Imagine takes imagination. To imagine no heaven or hell, no countries, no killing, no possessions, no greed or hunger, and even no religion, is to imagine God’s kingdom come. A new creation. Redemption complete. A brotherhood of man in union with God in Christ forever. Imagine that.